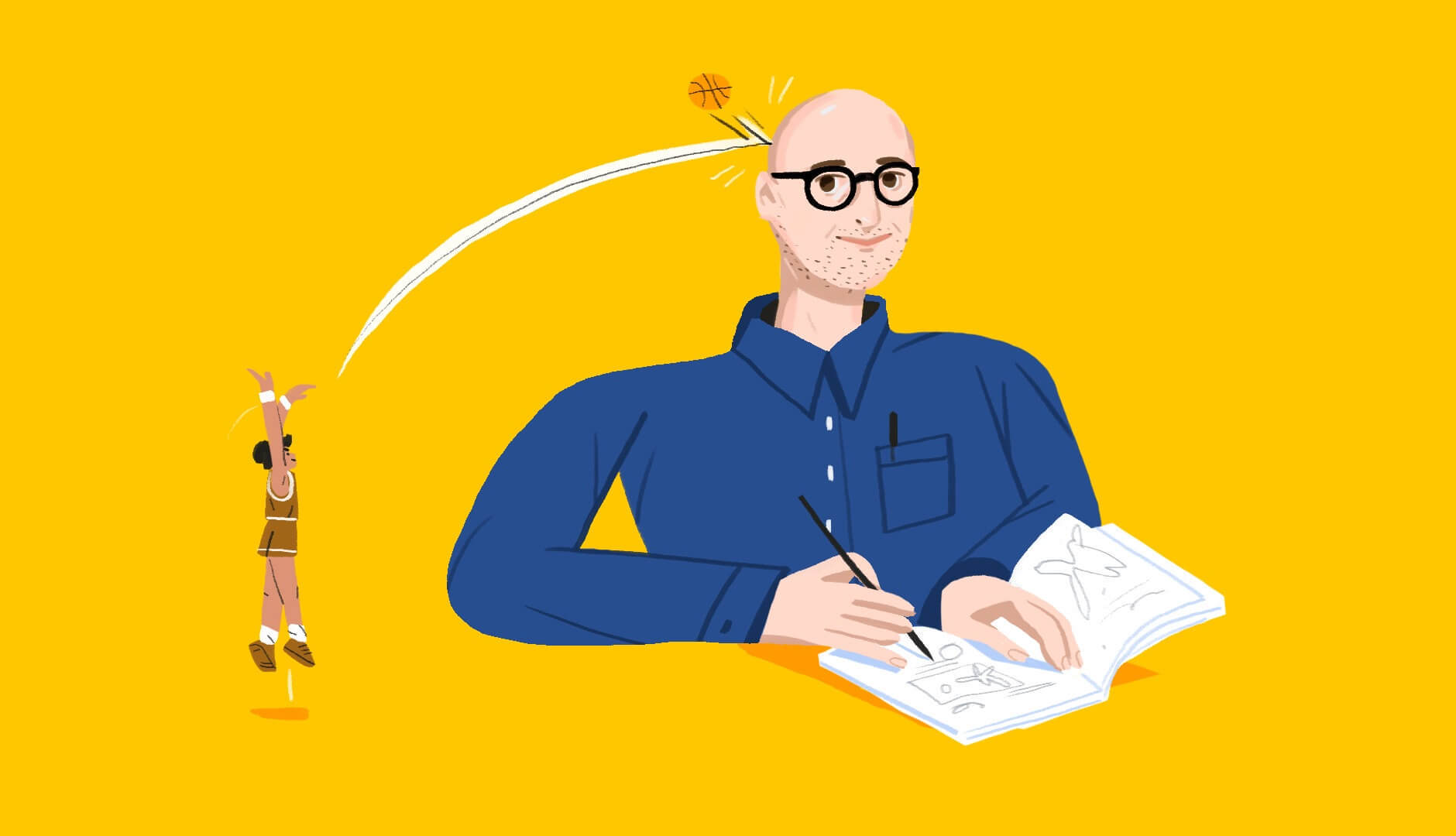 Talking Shop is an interview series where we talk to freelancers about freelancing. In this interview, we talk to Sam Bosma, an illustrator, cartoonist, and comic book artist in Los Angeles, California.

Sam Bosma: My name is Sam Bosma. I’m somewhere between an illustrator, cartoonist, or comic book artist. I’ve done editorial illustrations for the New York Times, New Yorker, The Wall Street Journal, commercial projects for MTV, Adweek, Hulu, Verizon, as well as background drawings on the Cartoon Network show, Steven Universe. I also write my own series of books called Fantasy Sports, which is exactly what it sounds like.

[N.B. Centering around a young explorer and their musclebound friend, the graphic novels take the two on a string of adventures and encounters with various monsters, which inevitably involve some sports showdown.]

And how did you come to do this type of work? 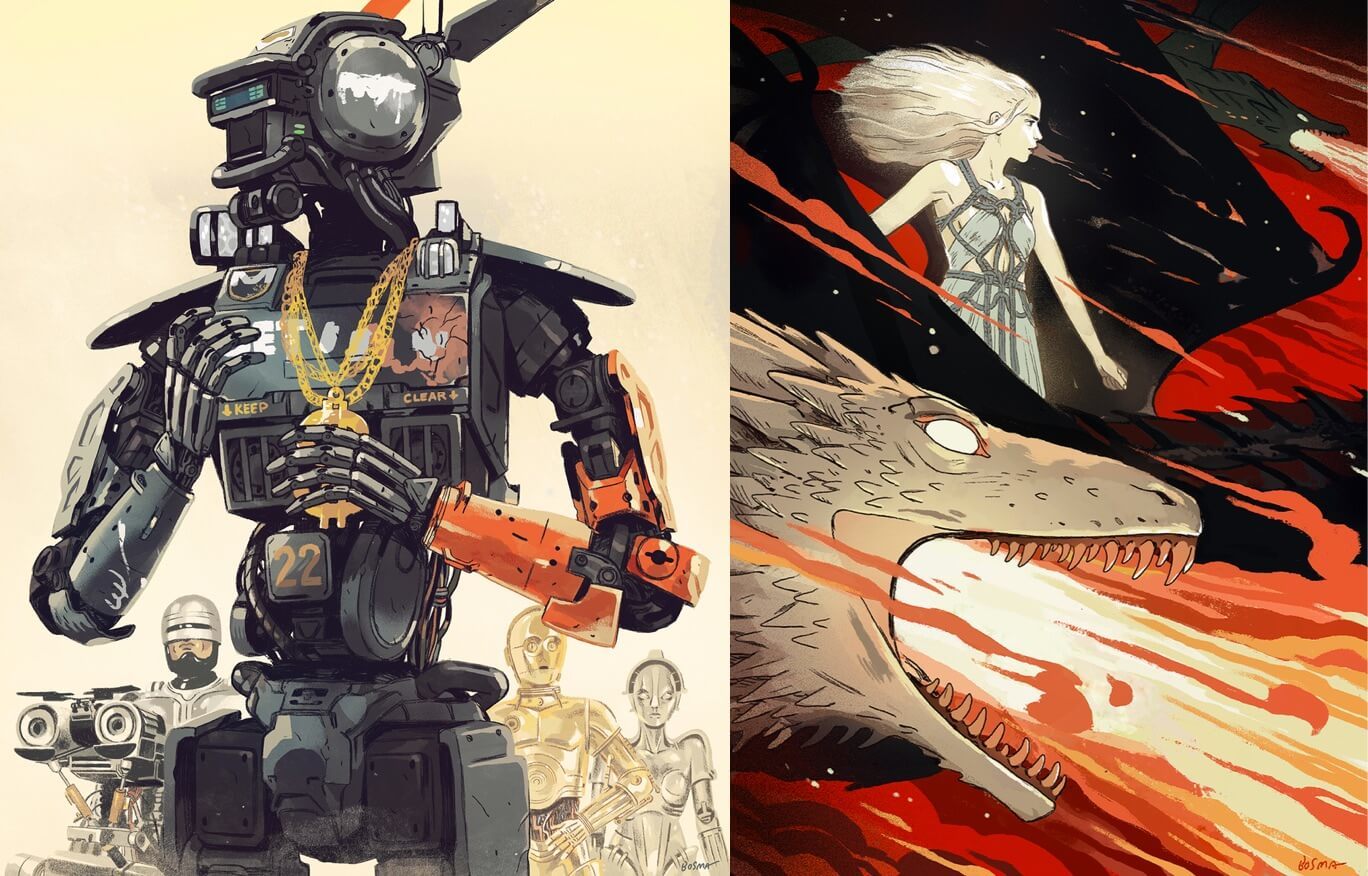 Well, I went to art school. I went to the Maryland Institute College of Art and was in the illustration program there. I really liked to draw. More than that, I really like to solve problems with drawings (versus a more fine art pursuit) and so that pushed me towards illustration.

“Illustration is about being partially flexible and partially opportunistic.”

You have to figure out where you can get the work, and where you want to go from there. You typically start with editorial clients, build your portfolio and hone your style. That allows you to figure out what type of work you want to be doing and that, in turn, takes you to different clients. My style, my approach, took me into comics and animations.

What problems do you solve with drawing?

With editorial illustrations, you’re trying to grab someone’s attention and convey a message or viewpoint in a matter of seconds. You have the constraints of your art director and your own time, of course, and it’s up to you to solve for those. 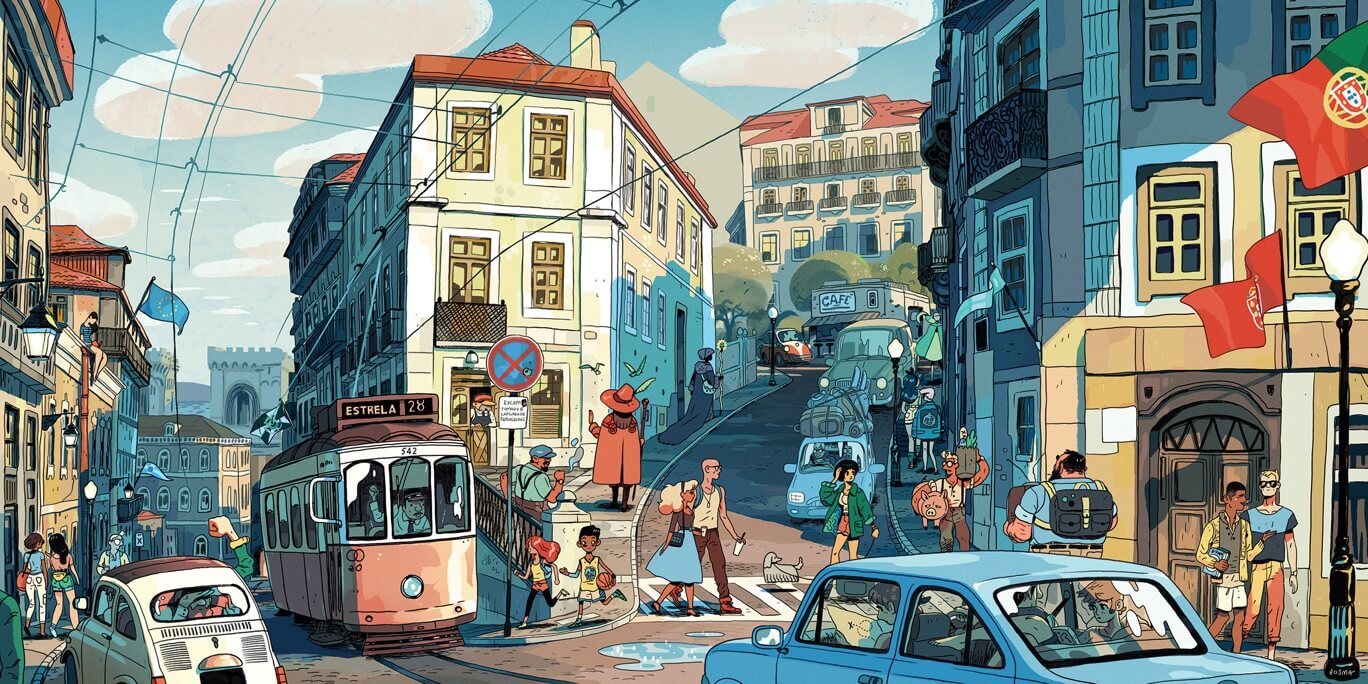 My favorite types of problems, though, are ones where I have to build a world. With animation, cartoons, comics, you’re either creating a world from scratch or contributing to one, and there’s a whole host of constraints that come with that. You’re introducing and developing characters, creating an environment, and evolving that narrative.

How did Fantasy Sports come about?

I graduated in 2009, right after the recession hit. A lot of potential career paths that illustrators typically pursued weren’t viable on their own—at least not for someone who just graduated. So, I started off taking what I could get, doing piecemeal illustrations here and there. You get the work you do, so the more I did, the more I got.

Simultaneously, I was still living in Baltimore, so every year I would go to this this convention of writers and comic book artists called Small Press Expo (SPX). Every year, I would just go and meet people. As my work progressed and I kept attending SPX, I began to notice a bunch of books that were along the lines of what I was interested in doing.

“This was around the time when I was getting frustrated with editorial work and looking for what was next. I thought, ‘Well, I could probably do this—I’ll give it a shot.’”

I researched how to print and bind my own books; I figured out logistics for printing the pages, the covers, binding, and that’s pretty much it. I read a lot, a lot of comic books during that time. A year later, I had my first edition of Fantasy Sports.

How did you take it from there?

After that first edition, the book got picked up by a publisher and turned into the series it is today. I had been talking to this publisher about doing something together, but wanted to have one book under my belt first before committing to anything.

It was also easier to make something off the cuff for myself, versus something that had to be developed and presented for show. With the first one completed, I knew I could do it on my own, and it was easy for me to continue the series with a publisher.

How do you go about pitching an idea to a publisher?

I've been lucky to have a couple of publishers who are interested in what I make. They trust me, my work, and are willing to sign off on concepts without a fully developed pitch. Many artists might make a few sample pages, draft an outline, write a synopsis, maybe include a few character studies. I tend to do that anyways to make sure I know what I’m getting myself into and set expectations right off the bat. 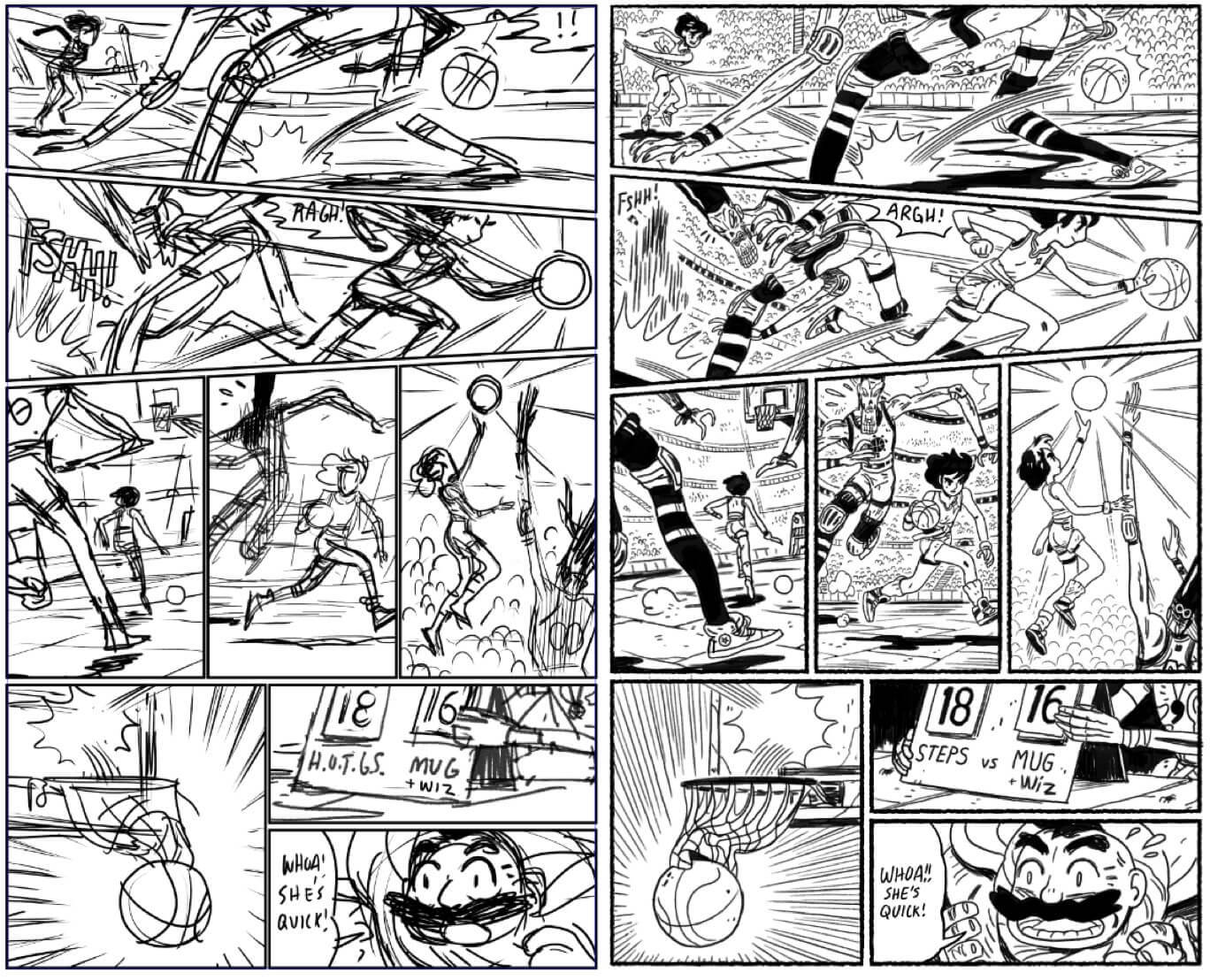 That's a good question. It's probably 50% my own comics, inching towards 60% now. Fantasy Sports takes a certain amount of time during the year, and then I spend another chunk of the year writing other projects for when the next book is done. Animation is the next largest chunk, probably 20—30%. The rest is a mix of editorial work and work for collectors’ markets. 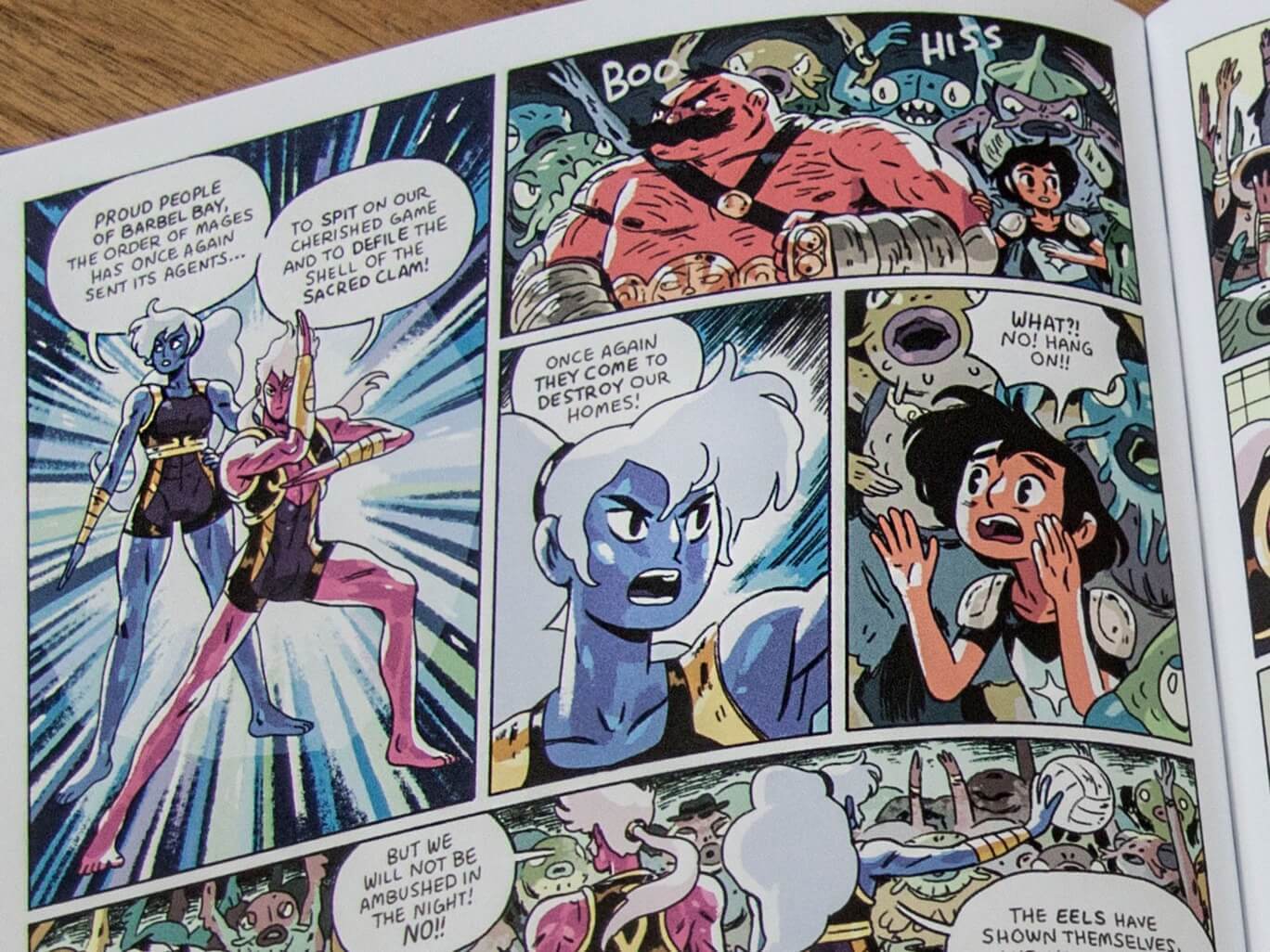 Everyone should write. I think it's important no matter what you do. For me, it's easier to see how things play out through writing. Writing helps crystallize my thoughts. It opens up more professional avenues, too. It’s given me more control in my projects, which is partly why I always reach for it in any work.

What advice would you give to a fledgling illustrator looking to break into publishing? 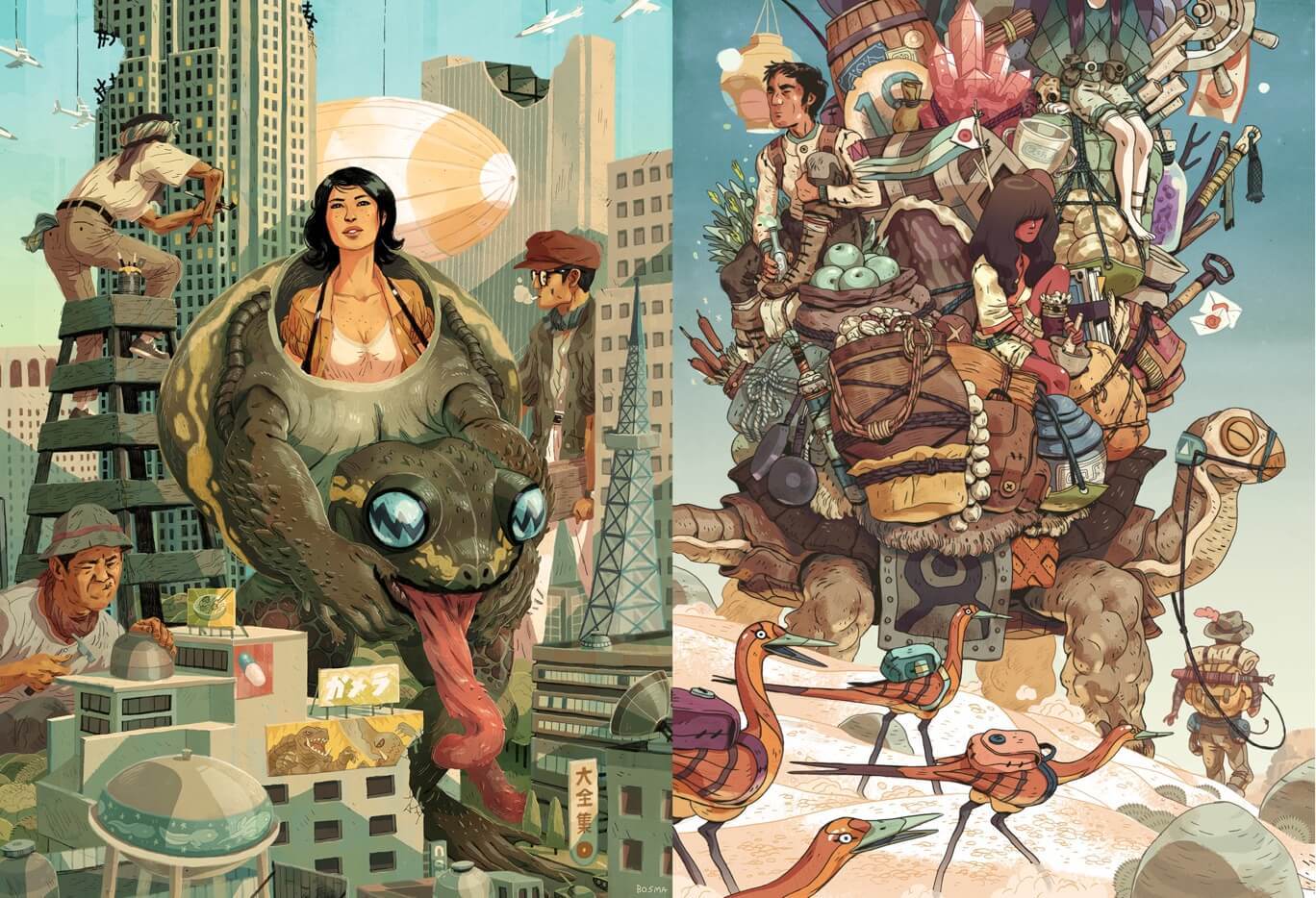 What are you most excited about right now?

My third Fantasy Sports just came out in July. It's about mini golf and it's also somewhat horror themed. It's weird, but it's good. I feel like it may be the best of the three that I've made.