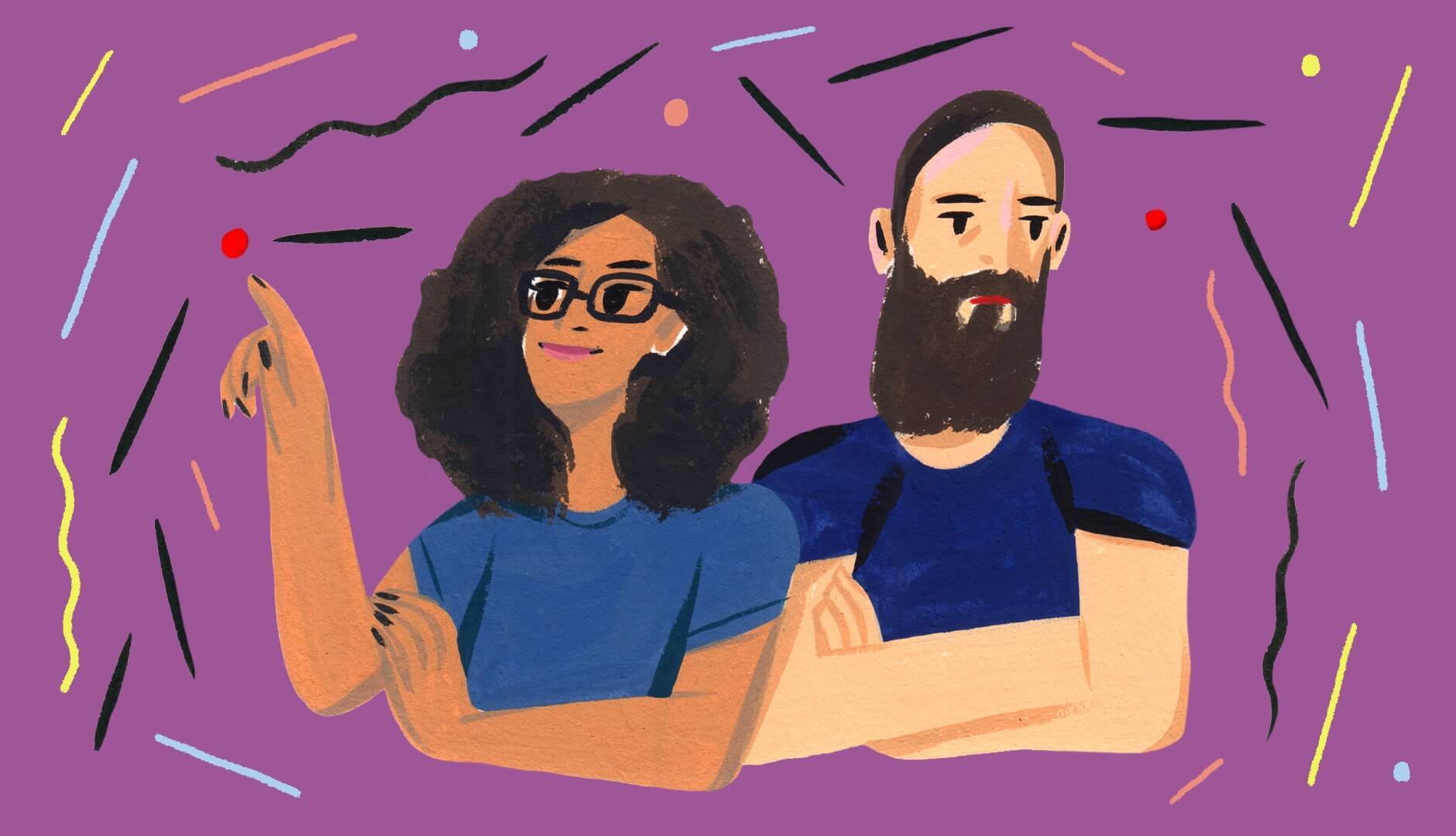 Talking Shop is an interview series where we talk to freelancers about freelancing. In this interview, we talk to Math Times Joy, a San Francisco-based design studio.

Tell me about Math Times Joy.

Celeste: I’ve been running Math Times Joy with my husband Rob for a little over a year and a half now. We do a range of design work, but typically focus on branding and identity projects.

Rob: The name itself comes from balancing strategy with fun. I tend to be the more mathematical and strategic one, she the more fun and exciting one. When it comes to Math Times Joy, our roles overlap pretty well. We’re both creative directors and designers by trade, so we juggle responsibilities based on the project requirements.

What made you decide to start a studio?

Rob: For me, I had been freelancing for about 8 years, and as time went on, I had worse and worse experiences working in house. I just realized that doing it for ourselves would be the best way to control our destiny and the work that we did. So, I asked Celeste to join me.

Celeste: During that time, I had been changing jobs a lot, working at all these different places, never quite happy with where I was or what I was doing. So, I agreed and now we’re doing it.

What are some of the other benefits of running your own studio?

Celeste: I’d say the biggest benefit is flexibility. You can manage your time and schedule. That can also be a detriment, of course. The other is control —we decide what projects we work on, how much money we charge, and so on.

Rob: The bottom line for me is securing our future. Many people we know in San Francisco jump from startup to startup with dreams of cashing out and getting rich. Elsewhere, we have friends working in studios several years, but the next year they’re laid off. It’s seeing other people go through these situations where they don’t have much control over their lives that spurred us to build something of our own.

What did those first few months running Math Times Joy look like?

Celeste: For me, it was really figuring out how to organize and start the business in a legal and technical sense. That was very interesting. One, it’s incredibly easy to start a business, but on the other hand, it’s not streamlined. There’s just so much information and no way to really figure out what is actually needed and required.

Rob: I already had a few freelance clients, so we were able to start tackling some of those projects together, which also gave us some time to plan ahead. We asked each other questions like: How do we define our process? What sort of clients do we really want to go after? What relationships do we have in place and can we rely on them once we’re officially a business?

What was one of the big lessons you learned early on?

Rob: Part of the benefit to being two instead of one is that you have an opportunity to play a larger role on projects as opposed to being a plug-and-play designer. All of a sudden, you’re accountable for much more. So, we spent a lot of time making sure that we showed our work in an effective way, but also proving that we could take more as a team.

Celeste: The biggest learning was having the confidence to ask for what you need, whether that’s projects or money or anything else. I always felt that there was some rules you’re supposed to follow.

“The reality is no one knows where the boundary is. It’s completely open. It’s whatever you want it to be.”

What type of projects do you look for?

Celeste: We love branding work and would love to do more of that. Being able to work with people that are new and trying to build something is always really exciting.

Rob: Something we’ve learned in the past year or so is that it’s less about the types of projects and more about the relationships. The client might have the money, but if the relationship isn’t there, then it’s just going to be a bad experience all around.

Celeste: My dream project would be to work on the identity for a restaurant. It’s easily on the top of my list of things to do. I love to eat. I have a lot of food tattoos.

Rob: Anything that allows us early access to shape more of the whole system. Lately, I’ve been more into science and architecture, so maybe a project with more of a physical aspect — like the interior of that hypothetical restaurant.

What have been some of your challenges a few years in?

Celeste: Right now, we’re focused more on how to get the projects that we really want. How do we just pitch some work that we want? Who do we talk to?

Rob: There’s a million ways to get projects that fit into certain categories, but going back to the relationship piece — we’re looking for strong relationships, too. We’re looking to create relationships with clients that can grow over time and lead to more.

Do you have any advice for someone looking to start their own studio?

Celeste: Have a bit of money saved, so that you can support yourself for the first few months. I don’t think many realize how long it takes for that first paycheck to come. After that, just go for it. Do it. There aren’t really any rules. I tell this to my graphic design students, too. Start working. It’s the only way you can really learn. I make the same argument for business. If you’re going to do it, don’t do this little half step — go all in.

Rob: I agree with that. Meet as many people as you can and build great relationships. Most of my work and best projects come through those channels. There are a lot of people that rely on sort of networking events to send business cards across the table. That doesn’t work as well as getting coffee with people in your neighborhood.

Where you hope to be in the next five to ten years?

Rob: The first year was an experiment to see if this thing would work. Now, it’s a focus on the work and getting the projects we want. It’s limiting our client list, and trying to develop a more refined selection of work with them.

Celeste: We’re moving into a new space this month, where we’ll be co-working with friends. I imagine that some of the next few years will be developing that and what it means. We’ll still be running our own studio, but there will be more of a community aspect there, too, so thinking more about how we fit into the larger community.

You can visit Math Times Joy’s website at mathtimesjoy.com.